Rex Geissler grew up in , , near where , and meet at the . Rex’s home in was three blocks from where Joseph Smith, the founder of Mormonism, was killed. Rex's love of sports including basketball, golf, cross-country, and football led him to start an annual Easter Basketball Tournament (http://www.greatcommission.com/carthage/) in his hometown, where he played on the High School Basketball Team and was named 1983 Western Illinois Player of the Year and . Of course, Geissler's 6'4" frame helped out quite a bit <g>. The Easter Basketball Tournament grew to include a couple hundred male and female players from around the United States, over 300 1-1, 2-2, 3-3, and Mixed Doubles basketball games, Dunk Contest, Road Race, and Banquet with Guest Speaker over the annual two weekend stretch while playing on five different courts from 8AM to 10PM on many days during the tournament's eleven year history. And for Rex, the tournament was instrumental in helping grow his organizational abilities and teaching him the value of loyalty and keeping in touch with friends.

Rex Geissler began studying the Bible intensely during the summer of his Junior to Senior year at and thanks to God's grace, committed his life to Christ when he was baptized July 27, 1986. After graduation, Rex moved to where he worked as a programmer for IBM for six years. Geissler moved from to at the end of 1992 to help support a church in by leading Bible studies and aiding in the church administration. Rex began a non-profit Bible & Book Ministry which distributed thousands of Bibles and spiritual books in the mid 1990s to 24 geographical church locations throughout the metropolitan area. This non-profit work became a publishing house named GCI Books, which has published ten books distributing over 11,000 volumes since 1995. GCI Books (http://greatcommission.com) focused primarily on the Bible's history, scientific issues, exegesis, and topical studies. GCI's published works include several different authors and books such as Is There A God? - Questions About Science and the Bible, Reasons For Belief - A Handbook of Christian Evidence, Keeping The Faith - The Early Church and the Apostolic Pattern by John Engler, Daniel - Prophet to the Nations, and The Grass Really Isn't Greener - Unfaithfulness and Restoration to God. Rex authored and published a very detailed overview of baptism, Born of Water. After seven years in and after Rex's parents passed away in during the fall of 1998, Rex relocated his family to Highlands Ranch, in 1999 where his family currently resides.

Rex met researcher and explorer in 1995 when Corbin was searching for a publisher for his collaborative book, The Explorers Of Ararat. Geissler and Corbin became great friends as they worked together expanding Corbin's initial ideas into the encyclopedic, history book, The Explorers Of Ararat: And the Search for Noah's (http://www.noahsarksearch.com/). Rex published, co-edited, co-authored, and helped coordinate the 21 co-authors to produce this 482-page, 265-photograph book. The book is known as an honest, fair-minded, objective, and hard-working research history, stating both the pro and con for each story and alleged claim.

Mr. Geissler worked with in , during October 2000 to create, type from Turkish into English, and sign the Agreement of Collaboration for archaeological research in (http://www.arcimaging.org/GeisslerRex/GeisslerRex1AI.html). Geissler photographed and posted the 2000 ArcImaging Turkey Photo Album from his extensive ArcImaging Research Expedition. Mr. Geissler coordinated the trip and hosting of the Ataturk University Rector and Dean of Sciences & Arts who are over the Archaeology Department on a visit to ArcImaging's headquarters, which included many scientific tours and ArcImaging presentations.

For the first time since 1989, the Turkish Embassy announced on October 10, 2001 that an international research group, ArcImaging, received federal permission from the Turkish Government and various Turkish Ministries including the Military and the Ministry of Culture to perform scientific research on . Rex Geissler and ArcImaging were extremely pleased and grateful to the nation of and to for their support in this scientific research and for this privilege.

Based on the 2001 ArcImaging permission granted by the Turkish Government entities, Rex Geissler was the Project Coordinator on the 2001 ArcImaging Mount Ararat Research Expedition, which was extremely successful and productive. Mr. Geissler and ArcImaging are grateful to the nation of and to all Turkish entities for their support in this archaeological research. Geissler and ArcImaging look forward to working together with the nation of as this scientific research continues over the upcoming years and decades to come and Rex recently signed and notarized a new contract with in May 2006. Both Geissler and Corbin were featured on the 2001 History Channel Documentary, History's Mysteries: The Search For Noah's Ark, which aired nation-wide numerous times on the History Channel.

In numerous Christian churches, Rex has taught Biblical Archaeology classes and Seven Churches of Revelation classes with many archaeological photographs. Rex is also involved with a church bible study group and is on the Board of Directors of the Camp Como Christian Camp (http://www.campcomo.com) where he wrote a database program to help track campers and supporters. 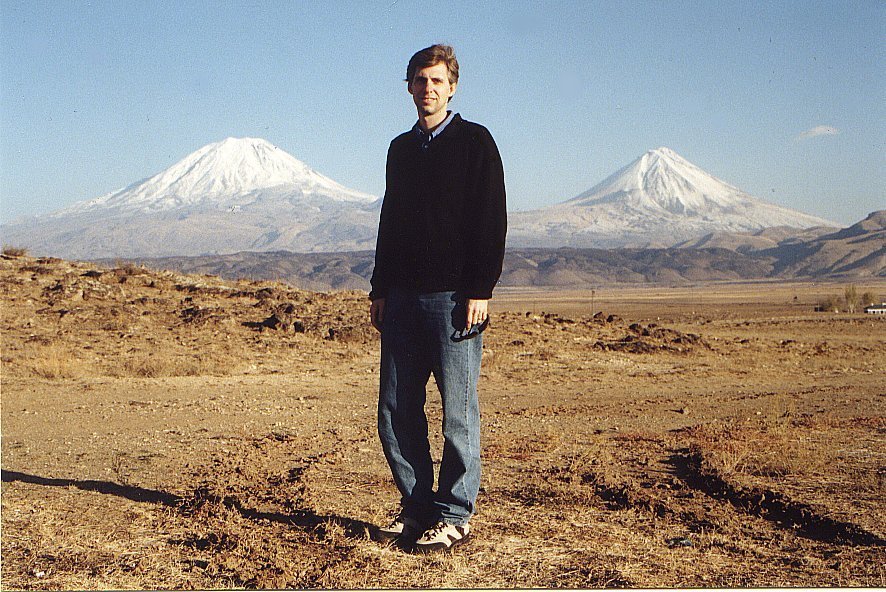 Bergama (Pergamum) Library 2000 #1 (200,000 Volumes given by Marc Anthony to Cleopatra and Alexandria Libary)

Birecik Euphrates River 2000 #1 (Pre-flood Boundary of the Garden of Eden, Crossed by Jacob when Leaving Laban)

Ephesus Theatre (Seating 25,000 where the Ephesians shouted for two hours "Great is Artemis of the Ephesians" because Paul helped many Ephesians become Christians and Silver Idol Trade was Threatened, Next to the Harbor Road where people would arrive from the ships although the harbor is now silted over) 2000 #1

Hasankeyf on Tigris River 2000 #1 (Pre-flood Boundary of the Garden of Eden, Dam will cause most of Hasankeyf to be Immersed Shortly)

Kazan Sagliksuyu 2000 #9 Necklace Pendant Back Side

Tarsus Ataturk 2000 #1 (There could be more photos, paintings, statues and impressions of Ataturk than any other human being in history with the exception of Jesus Christ and perhaps Mary due to the Catholic church as Ataturk is in practically every town, village and office)

Tarsus Gate given for Cleopatra by Marc Anthony 2000 #1